Sometimes the best teacher is a bad experience. It’s taken seven years of drought for Ed Getz, of Hoxie, Kan., to realize just how valuable wheat stubble – especially stripped wheat stubble – can be in his dryland, no-till rotation.

Getz’s farm operation is split 2/3 dryland to 1/3 irrigated. For the past few years as the drought has worn on, Getz has tinkered with his dryland rotation, trying to find the right economic mix. Traditionally, he had planted 1/3 wheat, 1/3 dryland corn and left 1/3 of his dryland acres in chem-fallow. But, the low market price of wheat and the payback on crop insurance for corn led him to plant only corn for the past three years. He found that corn was tolerating drought even better than milo, a traditional low-moisture crop. 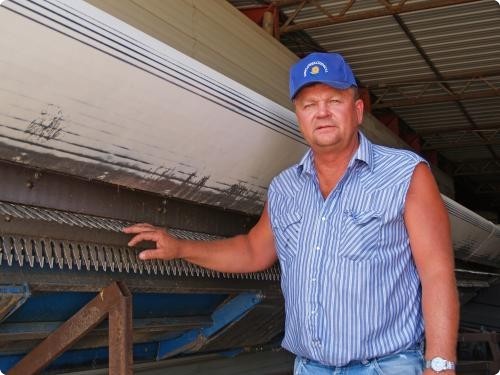 The results, however, have not been positive for crop yields or the bank account. This past summer – even before the price of wheat improved significantly – Getz was planning to put wheat back into his rotation, for the straw.

“The wheat is a byproduct. We want the straw to put the corn back into it,” Getz said in explaining his decision. “A significant number of people will agree with me. If you had to pay off ground in this part of the country with wheat, you’d have to raise a lot of it. The economics aren’t there. But, we need that straw to save moisture for the corn.”

Getz has had a 100 percent no-till operation since 1994, though he does plan to start strip-tilling his 2007 irrigated corn acres. The decision to go no-till was economic. It meant less machinery and lower overhead and input cost. He also believed that it would help conserve moisture on his farm, which historically receives about 18 inches of precipitation per year. He began using a Shelbourne CX84 28-foot stripper header in 2000 because of its straw height advantage.

“We were going back in to corn stalks with wheat. The no-till wheat tended to be shorter and, with a conventional header, the straw was short. I thought the taller stripped straw would give some benefit by trapping more snow and retaining the moisture better,” Getz said.

Getz appreciates the support he has had from Shelbourne and his local dealership.

“The Shelbourne people call every year during wheat harvest and see how I’m doing and if there are any problems,” Getz said. “It’s not like you bought (the header), they got your cash and said goodbye.”

He believes that using a stripper header is the only way to go in a no-till operation because of the ease of planting back into the straw. He speaks from experience about the benefits of planting into stripped straw over straw that has been conventionally cut. Again, a lot can be learned from a bad experience.

“The last year I cut wheat with a conventional header, the wheat made 80 bushel to the acre and the straw was so heavy my combine couldn’t spread it out. I had heavy streaks of straw through the field. You could see for two years after that where that heavy straw had been. I just couldn’t get a good stand through it. That wouldn’t have happened with a stripper,” Getz said. “I would never go back to conventional headers or conventional tillage – even if I could afford the equipment costs to do it.”

Getz believes that problems from eliminating the wheat rotation, and missing out on the moisture-retaining benefits of the taller stripped straw, have become more evident with declining corn yields each year the drought continued. The 2006 dryland crop was showing serious drought stress as it neared harvest in late August. However, a field of corn planted behind his house clearly showed what can happen when there is sufficient residue to catch moisture.

A cedar hedge separates his back yard from the corn field behind his house. The area had a late snow in spring 2006 and the hedge not only caught snow, but sheltered the area from south winds so that even after it melted, the ground dried more slowly than the open area 10 or 12 rows into the field. The effect on the growing corn has been dramatic. The rows next to the hedge in the snowdrift line were considerably taller, set on better ears and looked generally healthier than the drought-stunted rows just beyond the snow melt. Getz believes that if the field had been covered with stripped wheat straw, rather than thin corn residue, the corn would have had a much better chance of making grain.

If a farmer plans on raising wheat, particularly in a no-till situation, Getz believes that there is no better choice than a stripper header. He can cut faster and more efficiently with his Shelbourne. It does a better job on a weedy field, leaving the green matter in the field and out of the combine’s grain tank. And, his own fields have taught him about the moisture saving benefits of the straw.

“Some people might think a Shelbourne is overpriced, but I think they should give it a try,” Getz said. “I think there are benefits that more than make up for the initial asking price. We don’t even want to put a regular head on our combine anymore, or have one in our fields. You can get over so many more acres with the Shelbourne. Your fuel usage is reduced. And, you harvest more clean bushels, especially if you have hail damage or weeds. You just need mother nature to cooperate.”