they’re cheaper on fuel, easier on harvesters and process more grain than straw, and may fit the bill in no­-till, but they’re not for everyone.

That’s the feedback from a series of demonstrations of a Shelbourne Reynolds stripper front run by the east coast distributor, NSW Deere dealer Hutcheon and Pearce that took in southern NSW and Victoria.

Fitted with a rotating front drum with six rows of stripping fingers rather than a standard draper style feeder, the Shelbourne has been extensively used in rice for many years in Australia but is making in­roads into conventional cereal crops with interest coming from no-tillers wanting to maximise the preservation of standing stubble.

Hutcheon and Pearce sales consultant Myles O’Kane said the fronts were a rice harvesting favourite as they minimise the amount of trash going through the header ­which in rice often still sports shades of green.

“The Shelbourne has a combing action with fingers guiding the crop into a keyhole which strips the head off,” he said.

Mr O’Kane said the drum was “designed to run as slow as possible at around 450 to­ 500 rpm”, was designed for cereal crops and would suit no­-till systems.

“It is a cereal front and you look at the machine as a tool in your cropping system -­ it is not a direct replacement for a draper front -­ it is another purpose built tool.”

“Everyone has been pretty excited by the results it is leaving – they like the idea that you are not putting all the straw through the harvester and throwing it out the backside,” he said.

“The challenge for no-­till is how to get through it during sowing ­ in wetter areas the straw may pose a bit of a challenge, but in the drier areas in the northern states, the no tillers have got the soil compound working properly and the stubble is breaking down quickly and they can get through it with disc planters.”

Streatham farmer and Vic No­Till member, Scott Blurton said he was interested in checking out any tool that could fit the no­-till system he has been converted to for about six years.

“It certainly provides more ground cover -­ obviously that may pose some problems with the amount of stubble left but it is a good opportunity to see how it could fit, or if it does fit or doesn’t fit a no­-till system.”

He said the idea was to keep the longer straw off the ground.

“It’s always about exploration and we are always trying to push how far we can go with no-till.” 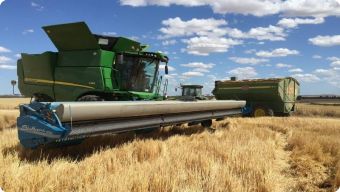