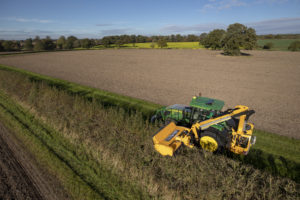 The new HC1600 flail head for the Shelbourne Reynolds HD700 and HD800 hedge trimmers has been designed to meet the need for a single- rather than more complex twin-rotor unit to produce a neat one-pass finish on three-year growth which will last longer and produce a better mulch of cut material. Fitted via a quick-guide hitch system, it can be specified on new machines or retro-fitted to existing ones.

With a 1.6m cutting width, the centrally-mounted HC1600 incorporates a new 150mm-diameter double-ended rotor tube, driven by a larger diameter motor pulley shaft with end greaser. The tube is 25 per cent bigger than that on standard Shelbourne heads, and provides 65 per cent better yield strength. Mounted on 60mm bearings and with external grease points, it provides a faster tip speed for the thirty T or competition drop-forged flails, which work in conjunction with a shear bar. The rotor is protected by a 3.0mm-thick steel hood with extra internal gussets and double-skinned nose which, optionally, can be hydraulically opened/closed, with rams fully incorporated into the side panels for protection. Divider nose ends and new top and end guards complete the design.

“The hydraulic front nose option is one we think will be particularly popular,” suggests Mr Smith.

“It enables users dealing with three-year growth to open the front of the head and allow more material to enter for processing in one pass, and then close it when working on lighter growth.”

There is a hydraulic roller option with improved linkage geometry, capable of accommodating 5in and 6in rollers, plus bi-directional roller linkage torsion bar and uprated linkage cylinder. Skid options include a standard unit with a greater element of exposed flail, and a verge skid.