Darryl Corriher started farming in 1975. A few years later a farm neighbor and friend Tom Hall wanted to get back into production farming. Now, over 30 years late C&H Grain Company is one of the most productive grain operations in the North Carolina Piedmont.

“I had land near his home and he had land near mine, and we worked up a business plan for sharing land and equipment. We had some rough going in the early years, but finally reached a big enough scale to make it work, and the partnership has been a lasting one that has worked well for us,” Corriher says. 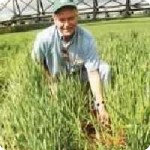 Timeliness has been the key to C&S farms, leading to a wall full of corn, soybean and wheat production awards over the years.

Typically they plant about a thousand acres of corn, 2,000 acres of soybeans and 500 acres or more of wheat. The 2009-2010 wheat crop is a classic example of how timeliness pays off for the North Carolina growers.

“We planted a few acres less wheat last year. We were able to get it all sowed by mid- to late-October. Sometimes November planted wheat works as well or better, but not this year. Our wheat survived the cold and snow much better than we expected, so we are looking for a pretty good wheat yield this spring,” Corriher says.

Last year they decided to try something a little different. They planted 40-50 pounds per acre of wheat to be used as a cover crop. They used some of the wheat cover crop for corn land and the rest for soybeans.

In a year with record rainfall in the late fall and early winter having the wheat cover crop on the ground prevented erosion problems. “We didn’t plan on all the big rains when we decided to plant the wheat cover crops, but it sure paid off,” the North Carolina grower says.

Noting how well the cover crop wheat looked in April, the North Carolina grower joked, “Maybe we should have put some nitrogen on and let it head out, pointing out that never was really an option.”

He burned the cover crop wheat down with glyphosate in mid-April and planted soybeans in these fields a week later. Again, good timing coincided with good weather to produce a good stand of soybeans.

“In this area of North Carolina we are always short of organic matter in the soil. Anything we do to increase organic matter correlates into better yield. By creating a mat, we feel that later in the season it will help hold moisture and help our yields,” Corriher explains.

The cover crop wheat was sowed behind corn, so it was planted in late September and early October. The wheat got an early start and is probably why it looked so good when he applied Roundup to it in April.

After the glyphosate burns the crop back, soybeans will be planted directly into browned wheat.

Using wheat as a winter cover crop isn’t new to agriculture, though it is new in some parts of the Southeastern U.S.

In Brazil, farmers grow soybeans every year on the same acreage. The saving grace is they grow cover crops to add organic matter to the soil and produce another crop in rotation with beans.

Though not widely used in the Southeast, cover crops have been used behind corn in many areas of the country. The primary reasons are to help dry the soil for spring planting and overall better moisture retention for following crops later in the growing season.

Cover crops also can be used to recycle nutrients that might otherwise be lost to leaching. As in Corriher’s case, this can be particularly beneficial in capturing nitrogen left behind after corn is harvested.

“If you have wheat straw all chopped up it’s sometimes hard to get the beans exactly where you want them. The stripper header has worked real well in our double-crop wheat and soybeans,” Corriher says.

C&H Farms recently bought a corn planter that can be adjusted to plant wide or narrow rows of soybeans. “We plant 30-inch corn rows and the units in between allow us to plant soybeans in 15-inch rows. We will also still run our drill for 7.5 inch rows.

“With the planter we feel like we will get a little better seed placement. With a drill you get the advantage of solid seeding. We will do a little experimenting with the two planting systems and see what works best.

“We will probably use the drill in most of our double-crop beans because we get better canopy closure to help with weed control, he adds. On our May planted beans we will plant more on 15-inch rows to save on seed costs,” Corriher says.

Another commitment the North Carolina farmers have made to being timely in all their production practices is investing in a grain dryer. “Some people use dryers just for corn, but we used ours for soybeans and wheat as well,” Corriher says.

“Once the crop gets ripe, we can go in after a rain and harvest our beans at 15-16 percent moisture, which allows us to get started a day or two early. A lot of times we get surprised because we think we will have to dry beans and find out we don’t need to do so. That tells me that without the drying capabilities we would have started combining beans a day late.

“In this area we often get stretches of 3-4 days of damp, humid weather in June and you can sit around two or three days waiting for wheat to dry down enough to harvest. With the drying capacity, we can get things done in a more timely manner.” Corriher says.

“Being willing to dry all our grain crops has been an important production strategy that helps us be more efficient and timely,” the North Carolina grower adds.