Twenty years after moving to a min-till crop establishment system, and a decade after beginning to trial no-till, 1,400ha Kent partnership John Boyd Farms, run by William and John Arthur Boyd and William’s son Mark, last season made a further change to the mechanics of its cropping system. Having witnessed the development of new drills capable of no-till seeding in high trash conditions, and invested in one in the form of a Horsch Avatar in a full commitment to no-till, partner Mark Boyd reasoned that there was little need to take a high volume of straw into the combine only for the machine to have to chop and spread it back across its full cutting width, with implications for even material distribution and fuel use.

That led the business to invest in a 12.3m (42ft) Shelbourne Reynolds stripper header to fit one of its two Claas Lexion combines in time for harvest 2019. Whilst not new technology, the stripper header now has greater potential in UK conditions, believes Mr Boyd, given no-till drill advances and enhanced crop and soil husbandry knowledge. 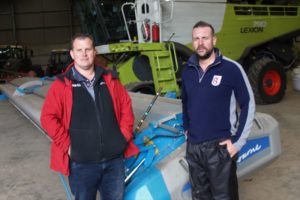 “The appeal of a stripper header was the potential to improve hourly throughput by minimising straw volume taken into the combine, while also potentially extending the number of days we can harvest and the hours we can cut each day, as grain can be dry and ready before the straw is fit. In addition, not taking in the straw cuts fuel and chopper blade costs.”

Although developed over thirty years ago, and been manufactured in the UK since then by Suffolk firm Shelbourne Reynolds, the stripper’s primary market has been overseas regions such as North America and Australia where straw is short and low in volume, and thereby easy to drill into. While it sells a few UK units each year for specialist crops such as grass seed, the UK’s more heavily-strawed crops, and the need under a conventional or min-till regime to process the straw in a second pass, mean it has not actively been promoted here, says the firm. A small but increasing number of UK farmers, though, have adopted the unit in recent years, to work in conjunction with direct drills.

“The first major change, in 2000, was adopting one-pass cultivations, with a Simba Solo disc/leg/press followed by a Simba Freeflow drill. In 2008, a Horsch Sprinter tine drill replaced the Freeflow, targeting improved performance in trash and allowing some direct drilling experimentation on lighter ground. 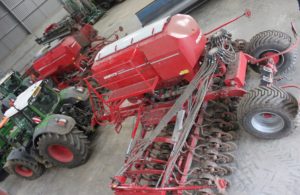 “By 2012, the Solo had noticeably helped improve soil structure, and we began moving gradually to no-till, switching initial cultivations to a Vaderstad Carrier compact disc, only subsoiling necessary areas, and later introducing cover and catch cropping into the rotation, which we’ve maintained.

“But trash at drilling was still an issue. In autumn 2015 we hired a Dale no-till drill to establish some wheat, with good results, but its tine coulters moved more soil than we wanted. When Horsch launched the single disc coulter Avatar direct drill, it offered the possibility of direct drilling in a wider range of soils and into high trash conditions, and with a split hopper we could also apply seedbed fertiliser. To retain some flexibility across different soil types, the farm purchased a 6m Avatar in 2017, but also replaced the Sprinter tine drill with a new version, this time also with a split hopper.”

Having settled on a drill system capable in no-till situations, Mr Boyd began considering the benefits of longer stubbles, to minimise harvesting costs and maximise output. Mindful of maintaining soil organic content, the business has traditionally incorporated all straw. While increasing stubble heights was one option, using a stripper header to comb the heads from cereals – and work in other crops such as peas – also came under consideration.

“Shelbourne Reynolds doesn’t promote the header here, but was supportive when I enquired about trialling one on the bigger of our two combines, a Claas Lexion 780, and we were sufficiently impressed to buy one for harvest 2019, retaining the 780’s conventional cutterbar for oilseed rape and beans, and using only a conventional head on our other machine, a Lexion 570+.”

Understanding how to get the best from the stripper/combine combination was a learning curve, says operator Gareth Smith, but first results were promising.

“Two particular things became apparent as we worked in different crops and varieties. First was the importance of good establishment and tillering, as the header operates best in a thick crop providing some resistance for the stripping rotor.

“Then we also found that, with wheat in particular, some varieties appear better suited to stripping, with lower loss levels than others, while establishment type also makes a difference. The first wheat field we tried, contract-drilled with a Cross-Slot, had established patchily, and we struggled for good output at acceptable losses.

“Switching to another field with a different soil type and variety that had been drilled with the Avatar, we really began to learn what the header could do. Starting mid-afternoon, we’d cut 46ha by 9pm. Conventionally, that area would have taken us a whole day.

“And while conventionally we aim for 0.5 per cent loss levels in wheat, we were happy to double that figure, as we were achieving spot rates up to 130t/hr. 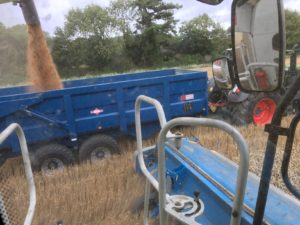 “While we don’t operate a strict controlled traffic system, we do minimise unnecessary trafficking, and that’s more important as new crop grows best through standing straw. At the other end of the season, the drilling tractor travels well on the straw.”

“Straw and root strength are crucial, so certain wheat varieties work better than others. And agronomy foundations must be good, with sound weed control to prevent stripping from spreading seed.

“Ear shape also appears important – club headed wheats seem to suit stripping well, while long and pointy ears may not be easy to strip completely. And a spread of variety maturity dates is crucial to making this system work, particularly on large acreages, while varieties that hold their ears well work best. Other user experience suggests Crusoe suits stripping well, for example, while Skyfall doesn’t so much. Different varieties have different root distribution, and those with strong crown root architecture supporting the straw at harvest will work best – smaller root balls may rotate against the force of the header in wet soils.

“Where straw laid in the same direction as drilling, the drill worked particularly well, with no evidence of hairpinning. Although it was wet, the soil surface remained actually quite friable and slots closed easily. 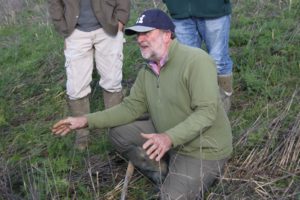 “Establishment costs of only £45-50/ha and a potential 30 per cent reduction in fuel use are appealing. In our own trials we’ve compared direct drilling with minimal cultivation and soil loosening, and although the direct-drilled establishment percentages were lower and the crop looked thinner all season, yield was only 0.25t/ha lower, bringing margins into line. And as the system is progressed and reduced movement helps the soil improve, that yield difference will narrow and the margins increase. With little scope to reduce costs in other areas of cereal production, establishment and harvesting costs are obvious targets.

“Any effect of standing straw on residual herbicides and on fertiliser requirements, and what the stubble environment does for slug numbers, are subjects we’re keen to investigate further.”

“Where incorporated straw breakdown is reliant on soil bacteria, fuelled by soil nitrogen, that doesn’t apply to root-attached surface straw, which will be weathered down. And as it collapses over time, there’s evidence of weed – including blackgrass – suppression from the thatching effect created, while the insulation effect may help hasten crop germination.”

“Weed seed left on the surface is also predated by insects. We’ve not rushed to change our weed control, but stripped straw does create an environment hostile to weed seeds, offering possible potential to reduce residual herbicide expenditure.” 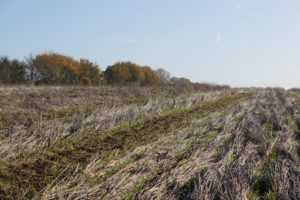 “Using flat fan nozzles to achieve a spray quality slightly coarser than medium will aid penetration, helping hit two-leaf blackgrass. Adjuvant use can aid mobility and attract the herbicide active to clay particles.
“There’s notably less green weed content in stripped straw, with possible potential for patch-spraying rather than blanket-treating with glyphosate before drilling.”
Mr Boyd also believes stripped straw leaves an encouraging environment for beneficial predatory insects.
“Webs show the longer stubble provides ideal spider habitat in autumn, and I think this may help flea beetle control. This season we’ve used no insecticide on oilseed rape.
“We’re only one year into the system, but based on maintenance of yields and reductions in fuel use during 2018-19, I’m confident in the decision we’ve made, and looking forward to this harvest.” 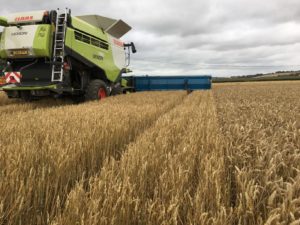