A move away from minimum tillage with rotational ploughing to a total no-till system which also incorporates livestock grazing and cover crops has helped one Wiltshire farm business cut its establishment costs while maintaining yields. But the additional ingredient that has further enhanced soil protection is a Shelbourne Reynolds stripper header for the farm’s combine.

There is a history of agricultural innovation at the Hosier family’s farm near Marlborough, Wilts, where Arthur Hosier began farming almost a century ago. In the 1920s he made possible the inclusion of the rotational benefits of livestock grazing into the predominantly arable farming system practised on the chalky soils of Salisbury Plain, by designed a mobile milking bail that allowed dairy cattle to be kept on outlying land.

Today, his grandson Patric and great-grandson George farm the same land, part of a business that now extends to 600ha (1500ac), with 480ha (1200ac) in an arable rotation over a wide range of soils, plus 150 breeding ewes and a suckler herd totalling 150 head. And almost 100 years on, the enterprise is at the beginning of another plan to enrich its land, by blending rotational grazing and the use of cover crops with the retention of standing crop residue by using a stripper header and establishing the next crop with a direct drill.

“We’ve recently been looking to go in a different direction, as I’m not convinced the way we’ve been headed over the past decade or so is right,” explains George.
“Under our old system we were cultivating up to four times to process and incorporate residues, using a lot of steel, diesel and manpower and disturbing the soil a great deal, even with minimum tillage. Our land – much of it hilly – covers a range of soils, spanning everything from clay over chalk, clay cap with flint and chalk with flint to easier loams and greensand, and what we’re now trying to do is disturb the soil as little as possible, increase organic matter content, build worm numbers, improve the structure and reduce the weed burden, particularly that of blackgrass.
“I became intrigued by what soils could do for themselves after a few years ago seeing a farmer drilling spring barley into a mustard cover crop. Straight behind the combine we now plant cover mixes, including phacelia, vetch, turnips and radish, to aid the soil biology and structure before the next crop. These feed the soil biology with root exudates and put carbon into the soil, while their roots also act as cultivators and help restructure and protect the soil from weathering.
“We also use grass crops between combinable ones, which adds some extra profit from grazing, as well as manuring benefits. Over the past couple of years we’ve expanded our livestock enterprises and extended our arable rotation, which now includes cover crops in addition to winter wheat, winter and spring barley, oilseed rape, peas, beans and grass.”

This focus has led to the abandonment of a minimum tillage regime in favour of a no-till system using the New Zealand-designed Cross Slot drill. But it has been the move to a Shelbourne Reynolds stripper header for harvesting almost all of the farm’s crops that has completed the circle and allowed the land to remain almost completely undisturbed between crops, while reducing the straw breakdown, drill slot hairpinning and favourable slug environment problems associated with taking the straw into the combine and chopping and spreading it.

“We had been using a Vaderstad TopDown – or ploughing rotationally every few years to bury grassweed seed – ahead of a Kuhn Megant tine drill, but these were sold in favour of a 5m Cross Slot drill with the UK-type single-blade coulters. During our first season with the drill, in 2014-15, we established half our crops under each system, and while some crops yielded strongly and others not so well, this was true of those grown under both systems. Establishment costs were very different, though. 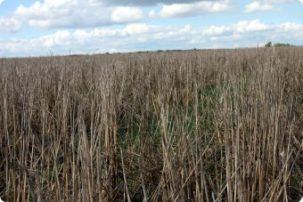 “In addition, by ensuring no more than the absolute minimum of soil movement takes place we’ve significantly reduced weed seed germination, and even the need for a pre-emergence herbicide – for winter wheat, no weed control has been required until March. That alone has cut £40/ha from our growing costs.”
But the key to taking the system a further step forward was to avoid disturbing the straw altogether by not taking it through the combine to then chop and create a slug-friendly environment. The following year the Hosiers trialled a Shelbourne Reynolds stripper header, and subsequently bought a 9.75m (32ft) Shelbourne Reynolds CVS32 for their New Holland CX8.80 straw walker combine.

“We retained our conventional header for crops where we want the straw for baling, and for oilseed rape and beans, but otherwise we now use a stripper header for all combining,” says George.
“We’ve found a number of advantages over using an ordinary cutterbar, in addition to reduced straw breakdown problems and the protection provided by the standing straw to the emerging crop and to the soil. Losses are lower and daily output significantly higher when compared to combining with our 7.3m conventional header, with forward speeds up 20-30 per cent. 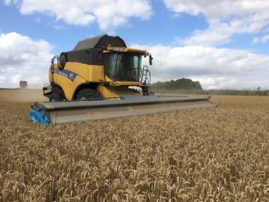 “Not taking in the straw means combine capacity is up out of all recognition, while diesel use is far lower, even though we still run the chopper to distribute, over the full cutting width, the chaff and the little straw taken in. In terms of adjustment in combine settings, working with the stripper header generally needs no more than opening up the top sieve when working in wheat.

“Using the stripper header means the straw is left in place to protect crops as they come through, but they aren’t doing so through lots of chopped straw. On the other hand, less soil disturbance does mean less slug disturbance. Slug control is a challenge, but rolling once in front of oilseed rape establishment and twice behind is helping here, and the stripper header/direct drill system will help build a favourable environment for slug predators.” 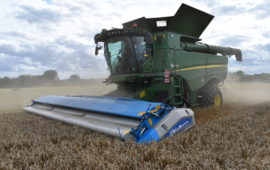