Developed originally for use on combines to speed grain harvesting by taking in only the ears, contractors in Denmark are fitting stripper headers on forage harvesters to allow production of crimped grain in a single process. Martin Rickatson learnt more. 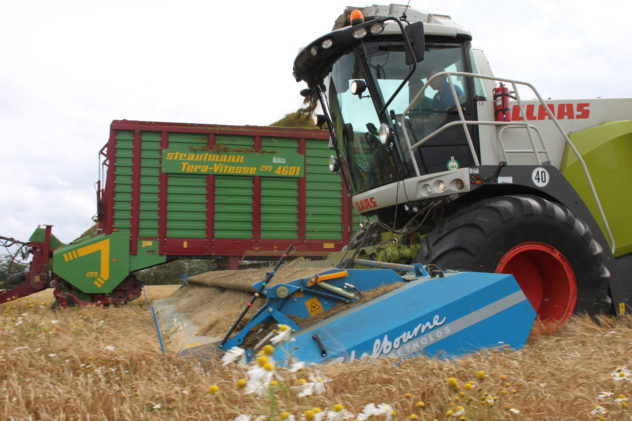 While crimping can produce a home-grown grain feed of high palatability with potential as a concentrate replacer, without requiring a fully ripe crop or ownership of a dryer or roller mill, the process of harvesting and processing, putting unripe material through a combine and then passing the grain through a separate crimping process before storage, can dampen its appeal.

But a new technique being increasingly adopted by Danish contractors and dairy farmers could make crimping more attractive by significantly reducing harvesting and processing time and cost, and leaving the straw behind to ripen – as well as boosting forager utilisation, something which could particularly appeal to farms running their own machine.

The stripper header, developed in the late 1980s as an alternative to the conventional combine cutterbar and working by removing only the ears of cereals, has been commercially produced since 1990 by Suffolk firm Shelbourne Reynolds. But while UK uptake has been relatively limited due to heavy straw yields here and subsequent disposal issues, it has found greater favour in North America’s shorter, lighter-strawed crops. This has meant the majority of production is exported, but one area where European farmers and contractors are starting to more recently adopt the header is for use on forage harvesters.

The principle, according to Danish contractor Klaus Kirkeby, is that a forage harvester equipped with a stripper header and, crucially, a maize cracker, can do the job of harvesting and crimping grain in a single pass.

The majority of the early adopters of the technique in Denmark, among whom are ten clients of Mr Kirkeby, are organic milk producers, who face additional challenges in often needing to undersow cereal crops in order to cost-effectively incorporate clover-grass mixes into their rotations.

“Harvesting a cereal crop where the grain and straw are not fit is already hard on a combine, but adding in a lot of green material from undersowing makes it twice as tough,” he points out.

“Using a stripper header on a forage harvester overcomes these issues. Although a separate mowing process is necessary if the straw is required, it can be left to ripen afterwards, and it subsequently does this much faster as the top of the stem is opened up. Most of what we are being asked to harvest is barley, with a small area of oats.”

Already an established contractor offering services including forage harvesting with a 653hp Claas Jaguar 960, Mr Kirkeby invested in a 7.3m (24ft) stripper header in time for the 2016

harvest. Aside from an adaptation to fit the header to the forager rather than a combine, the unit is unaltered. The rearward-rotating rotor inside the hood features eight rows of keyhole-shaped teeth which strip cereal heads, transferring them to an intake auger running at a fixed 200rpm, bringing them to the centre and conveying them to the forager’s feeder house where they pass on through the chopping cylinder and maize cracker before being ejected from the chute.

“At around 12.5km/hr forward speed, we run the stripper rotor at 700rpm, around 200rpm higher than would be used for drier grain going through a combine. The cracker rollers are closed up as tightly as they can be, to ensure as many grains as possible are broken, as they’re obviously smaller and softer than maize kernels. We’re getting pretty good results from this, although we are talking with Claas about rollers specifically for grain.”

In grass/clover undersown crops with spring barley cut around three weeks ahead of normal harvest date, what comes out of the forager chute is a grain/green matter mixture of around 65 per cent drymatter. On organic farms no additive is applied, although Mr Kirkeby sees no reason why one couldn’t be used in a conventional situation. Most customers are ensiling the grain – which comes mixed with some grass/clover and any other green material stripped by the header – in small, walled clamps, although an AgBag ‘sausage’ type system can also be used. These are firmly rolled, have grass layered on top and are double sheeted.

Near Varde, western Denmark, Kristian Clausen, who farms with his son Kaspar, has been producing organic milk since 1997. Their commercial herd of 540 Finn and Montbeliarde cows averages 10,000 litres at 4.00 per cent butterfat and 3.5 per cent protein, and organic status earns them a 15ppl bonus. This year, they are trying the stripped/crimped undersown barley technique for the first time, courtesy of Bounum, another contractor offering the service.

“With our shorter summers, ripening and short harvest windows can create problems, so I wanted to replace the rolled barley element of our grass/maize silage-based TMR,” Mr Klausen senior explains.

“But the other key attraction is that we’re getting more feed value from the crop than we would by combining – there are no combine losses, less risk of heads and grains shedding, we retain some grass and straw, and we aren’t waiting for the crop to dry – or spending money on drying.”

As this is his first year using the technique, and the product includes green material from the undersowing as well as crimped barley – in addition to which it has only just been ensiled – Mr Clausen is currently unsure of analysis. While the barley alone would be expected to have figures around 60% DM, 13% CP and 13 MJ ME/kg DM, the grass/grain mix will obviously differ from this, with potentially a third lower drymatter.

“But after leaving the straw/grass/clover for a few days to dry and recover from wheelings, we also have something that’s sufficiently dry to mow and big bale before storing under cover as a further forage, then leaving it to regrow for next year.”

Stripper Header Overview
Back to News