The standard of work done, and the condition and appearance of the equipment used, are a contractor’s best advert for repeat business and new custom, reckons Dorset-based Simon Osborne. But doing a good job is also about finding that equipment easy to work with and maintain, he believes. 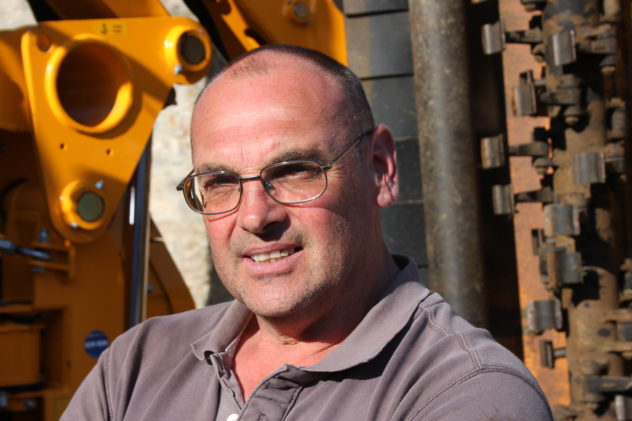 Operating for much of the year as a specialist hedgetrimming contractor from his base near Dorchester, Simon has offered hedge and verge management services for over a decade. With his workload increasing steadily, he has recently upgraded his hedgetrimmer not once but twice, both times specifying Shelbourne Reynolds Powerblade machines.
“A contractor needs different things from a trimmer when compared to a farmer who most likely uses his machine far less in a season,” he points out.
“The number of hours put on a hedgetrimmer can make a big difference if a machine is not built robustly enough, and that was the problem I was finding with the last machine I had of another make, in terms of things like wear to bushes and pins.
“I tried a Shelbourne Powerblade and was impressed by the build quality and the design, particularly with regard to areas such as service access in terms of grease points. But one of the main reasons I decided to place an order was that, when I priced it up, I found that a lot of the features that were optional on the other trimmer I was considering were fitted as standard to the Shelbourne.
“Another factor was that, apart from the paint colours, little seemed to have changed on the other maker’s machines over the intervening years, while Shelbourne’s trimmers appear to be subject to continual improvements.” 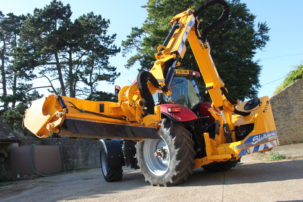 Two years ago he purchased his first Powerblade, a 760 T model with 7.5m telescopic reach. It was only with the introduction of a higher-spec model that he decided to replace it two years later.
“Some of the components in the heavier-duty specification of the replacement model I was offered, an HD865 VFRT, at first looked to me to be over-engineered, but ultimately that was a key reason I decided to switch, given that I’m doing around 800 hours a year of hedge trimming. Small rams, pins and bushes are no good on a machine doing that amount of work. But I also liked the fact that the grease points are well-sited and properly lubricate the bushes and not just pins. Grease is the cheapest way to protect against machine wear, and I like to make sure everything is properly attended to every day.
“I also liked a lot of other aspects of the machine’s design, such as the way the pump is sited behind the rotor hood, meaning that it’s protected yet easy to access.
“But one of the main reasons I switched was the benefit of variable forward reach, making work easier and more comfortable by bringing the head alongside the tractor. On top of that was the excellent trade-in price I was offered for my existing model. Residual value is a big plus of the Shelbourne machines.”
The larger model’s bigger contractor-focused build means the new HD 865 VFRT Powerblade is Simon’s first Shelbourne trimmer with axle brackets, but this has impacted very little on mounting and demounting time, while making the tractor/trimmer combination noticeably more stable, he says.
“Once the brackets are installed on the tractor, it takes only around ten minutes to mount the machine, and five minutes to detach it. With the wheel centres on my Case IH Puma 160 CVX set at 78in and with 200kg of wheel weights on the opposite side to the arm and head, the whole outfit is very stable, even on some of the steeper ground I work on, while the axle brackets also help keep the trimmer closely coupled to the tractor.” 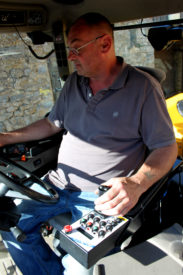 Aside from making it much easier to see the head in work, having variable forward reach in addition to telescopic capability presents a number of other advantages, says Simon.
“My season starts on July 1 with verge work, and I think the Powerblade’s float is second to none for this job, meaning I can work at a good forward speed and with a good view of the head. In a tourist area like this, traffic is a big problem, so having both telescopic and variable forward reach is also a big help, meaning I can cut verges from the field side of the hedge where possible.

“Although I charge by the hour, my priority is to do the best possible job for customers, so although speed of work is important, on hedges achieving a table-top finish is my main aim. The rotor and head design do an excellent job of pulling in material, creating a draught that sucks up cut material and pulverises it. Two-year growth needs weight, but I’ve found the T flails on the Powerblade are up to the job, and with the chart supplied they’re also easy to reassemble in the correct order after removal. And the adjustable rear roller is easy to use and does a good job.

“I also like the way I can easily alter the oil flows from the seat for all of the trimmer’s main functions, and I know exactly which settings I need for the fields I’m regularly asked to cut around. The control unit and its joystick are very easy to use.

“Making the extra investment in a Powerblade VFRT is something I’ve not regretted – the extra specification has made it well worthwhile.”